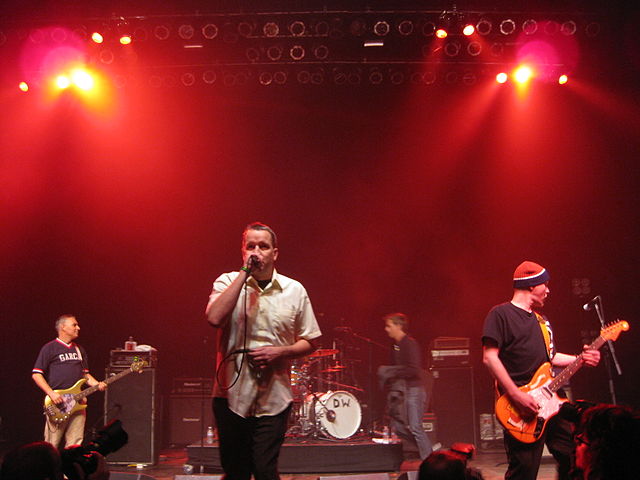 Our top 10 Vandals songs list takes a look at a punk band that arrived on the scene in the early eighties out of California. The group learned their trade playing among some other great punk bands such as Black Flag, The Germs, Bad Religion, Suicidal Tendencies and one of our favorites Social Distortion. However, the Vandals separated themselves a bit from the pack by focusing more on humor in their music rather than forms of protest and anarchy that many of the other punk bands did. In 1982, the Vandals signed a record contract with Epitaph Records. That deal resulted in the release of the Vandals first EP entitled Peace Thru Vandalism, a six track album filled with humor and spoofs on life itself.

We open up our top 10 Vandals songs list with a track from their debut EP entitled Peace Thru Vandalism. The track was released in 1982. Our favorite track on the EP was a song called “Urban Gorilla.” We couldn’t think of a better way to start out our top 10 songs from the Vandals list than with this one. It’s loud, it’s heavy, it’s raucous and it’s just so much fun.

Everyone loved the first Vandals first EP. Here’s another reason why. The band was actually spoofing on other punk bands and their anachronistic ways. Just listen closely to the lyrics. This one is hilarious.

This may just be the best Christmas song ever recorded in the rock and roll world. Yeah people will argue that it was Springsteen’s recording of “Santa Claus is Coming to Town,” or Emerson Lake and Palmer’s “I Believe In Father Christmas,”or yada yada yada. Believe me folks this is the one right here; the Vandals “Oi To The World.” No Doubt also did a great cover of “Oi To The World.”

I guess we shouldn’t write a top 10 Vandals songs list without including this amazing punk rock and roll cover version of Queen’s legendary song “Don’t Stop Me Now.” The Vandal’s version was issued on the album Hollywood Potato Chip released in 2004.

If there ever was a band that understood The Ramones it was the Vandals. You can hear it right here in the great Vandals cover of the Ramones song “Sheena Is a Punk Rocker.” The recording of the song was released on the album BBC Sessions.

Cutting into the second half of our top 10 Vandals songs list we represent the song “Pizza Tran.” The song was released on the album Fear Of A Punk Planet. The album was released in 1993. And we will just leave it at that.

The Vandal’s recording “I Have A Date,” was a cover of a song originally recorded by the Simpletones and written by Jay Lansford. The song was released on the Vandals album Live Fast, Diarrhea.

Ask any fan of the Vandals what their favorite Vandals song is and this one probably come up multiple time. This one rocks fast, hard and insane. The great track “Euro-Barge,” was released on the album Hitler Bad, Vandals Good in 1998.

At number two on our top 10 list of songs from the great band The Vandals we present the song “I Am Crushed.” This great song starts out a little slow and then the drums come smashing in and the beat crushes you to Kingdom Come. That may be a little dramatic but who cares it’s the Vandals, everything’s dramatic in a sense of humor style way. This killer song was released on the album Hollywood Potato Chip. What a perfect album title. This wonderous album was released in 2004. Long live the Vandals.

We close out our top 10 songs from the Vandals with our favorite Vandals  song entitled “My Girlfriend’s Dead.” Sadly, or maybe not so sadly depending on many factors, this song was never released as a single. Probably would not have done so well or then again maybe it would have went straight to number one. Once again depending on certain factors, if you get what we mean. In reality, according to The Vandals the point of this song was it was easier to tell your friends your girlfriend’s dead instead of admitting she was off with someone else. This brilliant piece of music was released on the album Hitler Bad, Vandals Good. The album was released in 1998. The song “My Girlfriend’s Dead,” was written by Warren Fitzgerald. Just a perfect way to end our top 10 Vandals songs list.