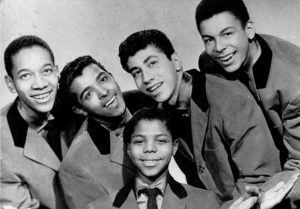 The doo-wop group known as The Teenagers are noted as one of the pioneers that first breathed life into the genre of rock and roll music, along with Frankie Lymon, when they first formed as a group in 1954. Prior to becoming the Teenagers, these young men originally started out with a group known as Earth Angels while still attending junior high school in New York. Joining Jimmy Merchant and Sherman Garnes was Herman Santiago, Joe Negroni, and later, a twelve-year-old named Frankie Lymon. When Lymon joined, he didn’t start out as the band’s lead singer. That was Herman Santiago, but fate had it when the group had to audition for a record label Lymon had to take a too ill to perform Santiago’s place. The group was signed that night with Lymon as the group’s lead singer henceforth.

While Lymon was the group’s frontman, there was one studio album that was produced. The Teenagers featuring Frankie Lymon was released in 1956 and brought forth five charted singles. There were additional band names this group was called before they were starting to be billed as Frankie Lymon and the Teenagers in 1957. This resulted in conflict among the band members that ultimately saw Lymon pulled from the group and perform as a solo artist from that point onward. The Teenagers replaced Lymon with a new lead singer, Billy Lobrano, but this proved to be an unsuccessful union. Lobrano left as a result.

In 1977, Sherman Garnes died of a heart attack, followed by Joe Negroni’s death a year later due to a cerebral hemorrhage. Over the years, a number of replacements were made by the Teenagers in an attempt to regain the glory they once had when Frankie Lymon was still the frontman of the group. Although the group is still together today, Herman Santiago remains the only original lineup member left. Today, the group is either billed as Frankie Lymon’s Legendary Teenagers or as The Legendary Teenagers.

“I’m Not a Know it All” was a cute love song sung by Frankie Lymon, who stood out so powerfully that it was understandable why he and his fellow bandmates were billed as Frankie Lymon & The Teenagers. It’s unfortunate circumstances from the industry’s decision to give this group the name it did result in the split-up as there was so much potential for this group to do so much more together. The Teenagers tried hard to move on without Frankie Lymon, but there was no talent at the time that could nearly match what he could do, and not simply as a vocalist. Everywhere Lymon went, a trail of charm went with him. The Teenagers lost that when they couldn’t overcome the differences that resulted in Lymon having to go on as a solo artist.

If there is a perfect song to play on Valentine’s Day, “Please Be Mine” would be it. The Teenagers performed beautifully, as did Frankie Lymon, in one of two ballads that were recorded on the group’s only studio album they did together. Fans of the entire group during their brief time together can only imagine what the rest of the 1950s would have been like if Lymon hadn’t been separated from the band due to what seemed like irreconcilable differences.

“Share” was a doo-wop ballad that may not have charted on any official music charts, but is no less powerful a song than the rest that did. Not only as a supercharged song full of blues, rhythm, and soul, Share served as one of those slow down and enjoy the moment songs that should have seen a spot on the charts, but the industry was so blown away with the catchy, faster-paced singles that it felt like Share was overlooked for the classic gem it was, and still is.

#7 – I’m Not a Juvenile Delinquent

“I’m Not a Juvenile Delinquent” was a hit on the UK Singles Chart, as it peaked as high as number twelve in 1957. It served as an inspiration for a few other artists to cover the song, but none achieved any chart success like the Teenagers’ original. I’m Not a Juvenile Delinquent was featured in the 1956 musical drama, Rock, Rock, Rock, as well as the 1972 crude comedy, Pink Flamingos. The popularity of this song was also featured in the 2010 video game, Mafia II.

On the UK Singles Chart, “Baby, Baby” became a number four hit for Frankie Lymon and The Teenagers, thanks to its fast-paced doo-wop style. It was this group, plus its style of music, that served as the key influencer to bring to the American music scene the first British Invasion wave by the likes of the Beatles, the Rolling Stones, the Kinks, and so many more. Between the singing, the dancing, and the beautifully played instrumentation, there’s zero wonder why the birth of rock and roll music became so powerful right from the start.

The fourth of five charted singles from the album, The Teenagers Featuring Frankie Lymon, charted as high as number eight on the US Billboard Hot R&B/Hip-Hop Songs chart and appeared at number seventy-seven on the US Billboard Hot 100. “The ABCs of Love” was a beautifully played declaration of love song only the youthful Frankie Lymon and The Teenagers could pull off.

“Who Can Explain It?” was on the B-side of the forty-five record that pulled off a rarity. As a hit on the US Billboard Hot R&B/Hip-Hop Songs chart, it charted higher at number seven than the hit single that was recorded on the A-side, which is the song listed immediately after this one. Immensely powerful, this song is so full of rhythm and soul that it’s easy to forget the lead singer is just only a thirteen-year-old lad that can hold notes in his vocal cords even better than some of the best-trained adults.

On the US Billboard Hot R&B/Hip-Hop Songs chart, “I Promise to Remember” became a number ten hit in 1956, as well as charting at number fifty-seven on the US Billboard Hot 100. At the time, even today, nobody could hit those lyrical notes like Frankie Lymon, who was instrumental to the success of the Teenagers since the day he first joined the group in 1954. Despite being the youngest member of the band, his vocal talent was years beyond anything anybody ever heard. He, along with The Teenagers, served as an inspiration to music fans and performers of all ages to get into the groove and doo-wap with them.

In 1956 as the second single released from the Teenagers’ debut album, “I Want You to Be My Girl,” became a number three hit on the US Billboard Hot R&B/Hip-Hop Songs chart. It also climbed up to number thirteen on the US Billboard Hot 100. The doo-wap style Frankie Lymon and The Teenagers delivered when they first burst onto the music scene served as the fireball that ignited the genre of rock and roll. The doo-wap craze, meeting rhythm and blues, plus a heavier delivery of instrumental sounds became the start of something that would forever impact the music industry.

In 1956, the debut single, “Why Do Fools Fall in Love,” was the first of five that came from The Teenagers, featuring Frankie Lymon’s album. It was also the most successful hit the band ever realized as it topped the US Billboard Hot R&B/Hip-Hop Songs chart shortly after it was released in January. It also topped the music charts belonging to the nations of Belgium, and the Netherlands. Globally, “Why Do Fools Fall in Love,” was a global hit as it climbed within the top ten among most of the European charts and in New Zealand. The US Billboard Hot 100 charted the song as high as number seven.

This song was originally written and composed by Santiago and Merchant, but when Lymon first joined the group he helped them rewrite it. Lymon’s version is what earned the group an audition with Gee Records, the label that would sign them up. Santiago was supposed to sing that song at the audition but was too sick to do so. Lymon took his place and this resulted in the group being signed as The Teenagers. In the UK, the British Phonographic Industry certified this single silver for selling over 250,000 copies in that nation alone.