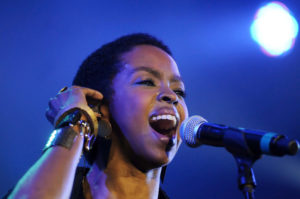 Our top 10 Lauryn Hill songs list presents the best releases from a widely celebrated American female artist whose fame is well-deserved. Born in 1975, Lauryn Hill started her impressive music career while still in high school. Pras Michel invited Lauryn Hill to form a band called The Fugees which she agreed to without hesitation. The two tagged the enormously talented instrumentalist Wyclef Jean on the band, having them entertain audiences at talent shows. Initially, the band started under the moniker Translator Crew but renamed it Fugees.

Lauryn Hill possessed one of the most identifiable awe-inspiring alto voices which majorly consisted of tuneful rapping. She was a major pillar to the success of the Grammy Award-winning album, The Score (1996) at Fugees. However, the group disbanded after Lauryn Hill’s sour ending of the relationship with Wyclef Jean. In 1996, Lauryn Hill met her lifetime partner Rohan Marley, son to the famous reggae pioneer Bob Marley. The two fell in love and soon welcomed their firstborn child, Zion David. Later in 1997, Lauryn Hill launched her solo career.

Her debut solo album, The Miseducation of Lauryn Hill (1998), remains a gem amongst her releases, making her one of the iconic and most influential female singers of the century. The album tagged notable and successful music legends, including Mary J. Blige, D’Angelo, John Legend, and Carlos Santana. The Miseducation of Lauryn Hill (1998) received positive reviews from both fans and critics. The album peaked at number one on the Billboard 200 for six weeks and sold over twenty million copies worldwide. Lauryn Hill became a star in the neo-soul scene rubbing shoulders with other artists such as Missy Elliott, Mary J. Blige, Erykah Badu, and Meshell Ndegeocello. Her debut album also led her to becoming the first woman to bag ten nominations in a single Grammy Awards ceremony, winning five-category awards.

However, Lauryn Hill felt negatively affected by the fame she had gained. The result of this was staying away from the public eye. She also expressed her discontent with the music industry, which led her to rarely appear in the spotlight. Despite all that, Lauryn Hill recorded a live album MTV Unplugged No. 2.0 (2002). While the album was great, it failed to match the success of her debut album. Since then, Lauryn Hill has not released a full album but continually released singles while attending different festivals.

Despite her inconsistent involvement in the music scene since her solo album, Lauryn Hill remains one of the greatest female rappers. This has been well recognized by Billboard, who have ranked her seventh on the list of greatest rappers of all time. She is only woman to feature on the list. Even better is her impact in helping revive the hip-hop scene, whose light was dwindling after the murder of rappers Tupac Shakur and The Notorious B.I.G. Lauryn Hill has influenced a whole generation of artists, including Kanye West, Nicki Minaj, Jay-Z, Britney Spears, Beyoncé, SZA, and Adele to name a few. Let’s check out the top 10 Lauryn Hill songs that present a taste of inspirational vocals from one of the finest singers of all time.

Ushering us to the top 10 Lauryn Hill songs list is the brutal hit “Consumerism.” The song was released on the eve of her release from her three-month imprisonment due to tax evasion. “Consumerism” finds Lauryn Hill speed-rapping about the irrational conduct by society. The artist wished to communicate her views on the then socio-political archetype. For those who have listened to most songs by Lauryn Hill, “Consumerism” feels like a deeper insight on matters explored in her song “Freedom Time.”

“Tell Him” was originally a hidden track on Lauryn Hill’s debut album, The Miseducation of Lauryn Hill (1998). Avid Bible readers can already cite how the lyrics to the song compares to the Scriptures. It is amazing seeing Lauryn Hill shift from rapping to melodic singing. Other artists to have released a song under the same title (but different lyrics) include Bert Berns, Shayne Ward, Nina Nesbitt, and Carlton Black. Colbie Caillat sang Lauryn Hill’s version of this song. Her performance on the song might not have been famous but it was awe-inspiring.

Lauryn Hill made a comeback to the Billboard Hot R&B/Hip-Hop Songs Chart with her song “Repercussions,” after spending more than a decade without finding glory on the chart. The song peaked at number eighty-three on the chart. After a long time, Lauryn Hill was making a comeback to her true self in the music scene. While the song could not replicate her twinkle in songs in the album The Miseducation of Lauryn Hill (1998), “Repercussions” fights its way to the top 10 Lauryn Hill songs. The song finds Lauryn Hill giving some of her best neo-soul vibes thanks to uplifting vocals.

“Lost Ones” is a song from Lauryn Hill’s album The Miseducation of Lauryn Hill (1998). Rarely do we have a diss track win a Grammys. However, Lauryn Hill’s “Lost Ones” went on to win the Best Rap Solo Performance on the 1999 Grammy Awards ceremony. While she didn’t mention her ex-boyfriend Wyclef Jean in the song, the lyrics vividly point towards him. “Lost Ones” allowed Lauryn Hill to spill out all she had in her heart after her silence about their breakup. The song peaked at number twenty-seven on the Billboard R&B/Hip-Hop Airplay.

Number six on our top 10 Lauryn Hill songs is the hit “To Zion.” The song finds the artist singing about her firstborn with Rohan Marley, Zion David. Specifically, the song puts to light her uncertainty concerning her pregnancy and the excitement that came after baby Zion welcomed her to motherhood. While the album featured other more famous songs, “To Zion” remains the emotional zenith of the 1998 release.

#5- Nothing Even Matters ft. D’Angelo

“Nothing Even Matters” is one of the best collaborative songs by Lauryn Hill, having her tag D’Angelo in the duet. Her debut album found her celebrating many things, including her relationship with Rohan Marley. In the song, she expresses love and how her relationship with Rohan made all other things in life quite irrelevant. Her perfect delivery of the theme of love took a humanistic approach. This is quite different to the cliché overt sexuality used by most artists in expressing the same.

If you dare pick on another artist’s song for remaking, then you better deliver a mind-blowing performance. Lauryn Hill didn’t struggle with covering “Can’t Take My Eyes Off You,” originally a song by Frankie Valli. The song was featured on the film Conspiracy Theory. Lauryn Hill was nominated for a Grammy Award on the Best Female Pop Vocal Performance, thanks to her awe-inspiring vocals in this song. However, she lost the award to Celine Dion, who had been nominated credit to her iconic vocals on the Titanic soundtrack “My Heart Will Go On.”

“Everything is Everything” is one of the unforgettable precious gems from The Miseducation of Lauryn Hill (1998). The song was penned to mark Hill’s return to brighter spaces after some trying times in her life and unprecedented losses, including disbanding of Fugees. “Everything is Everything” features the amazing piano tunes from the then infamous John Legend, who had impressed Lauryn Hill at the University of Pennsylvania with a cover of Stevie Wonder.

While some of her songs exclusively featured one genre, “Ex-Factor” blended R&B, hip-hop, and neo-soul elements. The song was written by Lauryn Hill, serving as an excruciating examination of a failing relationship. “Ex-Factor” sampled Wu-Tang Clan’s song “Can It Be All So Simple.” Amazingly, several artists have covered the song, including John Legend, Kelly Clarkson, and H.E.R. The song was sampled by Cardi B in “Be Careful” and Drake in “Nice for What.”

Number one on our top 10 Lauryn Hill songs list is the song “Doo Wop (That Thing).” Filled with hip-hop elements, the song is the only number one song on the Billboard Hot 100 by Lauryn Hill. “Doo Wop (That Thing)” serves as a warning for people to avoid exploitation by their partners. Lauryn Hill became the second woman after Debbie Gibson to have a number one song that she penned, recorded, and produced by herself on the Billboard Hot 100.