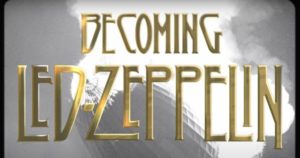 For all the personal issues and tragedies that plagued the band, the power of Led Zeppelin has always, and will always be about the music. If you grew up in the 1970s as a teenage rock and roller, Led Zeppelin was a major part of your life. No one understands the power of Led Zeppelin like 1970s teenagers. Led Zeppelin was such a powerful force in music. According to Jimmy Page and anyone who saw the the movie’s world premiere at Venice Film Festival,that’s exactly what the documentary focuses on. Furthermore it specifically looks at the origins of the band. A time period that is not really been well-documented. We all know about Jimmy Page and The Yardbirds, but this documentary goes further, it digs deeper into the careers of all four members before they were Led Zeppelin. Becoming Led Zeppelin takes a deep look at the early days of the band. It researches the period when the band was just formed and were playing some lesser-known clubs working it all out.

It’s important to recognize the meaning behind the title of this documentary Becoming Led Zeppelin. Director Bernard MacMahon presents only the start of the band’s career The film goes no further than the band’s second album Led Zeppelin II released in 1970. But thats okay, because it goes further than any other Led Zeppelin documentary ever released because of the access to not only rare and unreleased film clips, but also deep genuine interviews with Jimmy Page, Robert Plant and John Paul Jones. One of the film’s greatest features is a rare unreleased interview from 1971 with the great John Bonham.

Becoming Led Zeppelin presents rare concert footage from angles never seen before during Led Zeppelin’s first Scandinavian tour. The director Bernard MacMahon supposably sought out cameraman from the lates 1960s who filmed many of Led Zeppelin’s early shows in a desperate attempt to unveil film that has never been released. The man was very successful in his attempts as Led Zeppelin fans are going to go crazy over what they will be seeing in the film.

There has always been much discussion over Led Zeppelin’s use of famous blues riffs and lyrics from the blues artists of the past. In the documentary Becoming Led Zeppelin there is much candid discussion by the band members over the music that inspired them and fueled the music they would compose as a band and the impact that their influences had on them as individual musicians and songwriters. This is a true origins story.

There are some really interesting revelations told in the story especially about the session work that Jimmy Page did in the 196os. I bet you never knew that Jimmy Page has a James Bond connection as he played on the legendary James Bond Motion Picture title track “Goldfinger.” Ever wonder why Led Zeppelin rarely released singles? The band talks about the fights they had with Atlantic Records in order to keep complete control over the band and not let marketing ruin an image that they were dead set on controlling and have continued to do so right up to this day. It’s one of the reasons why it’s so shocking that the remaining members of Led Zeppelin have authorized a documentary about the band. Yet, it’s also very telling about the documentary itself. This is a wonderful film that anyone who loves the music of Led Zeppelin will completely enjoy.  There is no bs no gossip, no what ifs. It’s all about what happened and how it began while celebrating the greatest rock and roll band in classic rock history.

Below is a clip from the film Becoming Led Zeppelin. The concert footage of the band performing “Good Times Bad Times,” from their first album is stunning.