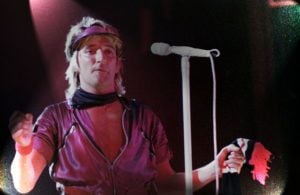 Scotland has given the world a lot of great things. Whiskey, the Loch Ness Monster, bagpipes, haggis, deep-fried mars bars… the list goes on. In fairness, the greatness of some of those things is up for debate. What’s not in question is the talent of one of its most famous sons, Rod Stewart. Stewart, we should point out, has a Scottish mother but was born and raised in London and has never lived a day of his life in Scotland. He has, however, worn enough tartan and claimed to be Scottish enough times for us to overlook the fact. Anyway, where he’s from isn’t important. It’s the voice that matters. The voice, and the songs he channels it through. Sixty years after he first began performing, he’s still selling albums, still selling out stadiums, and still delighting us with that rasp. Without further ado, here’s our take on the top 10 Rod Stewart albums of all time.

After several years in the creative wilderness, Rod Stewart made a return to form with 1988’s Out of Order. It’s no Every Picture Tells a Story, but it’s not another Body Wishes, either, and for that, we should be very, very grateful. After spending his previous three albums drowning out his signature sound with synths and mechanized drum loops, Out of Order finds him getting back to basics. It’s still very much a product of its time, but there’s enough rasp, riffs and rock to cut through the studio slickness.

By 1978, disco had arrived. Some of the old guard accepted it as a passing phase and steadfastly ignored it. Stewart decided to give it a shot. The result wasn’t entirely successful, but you can’t fault Rod Stewart for trying. Neither can you fault its lead single, “Da Ya Think I’m Sexy,” even if the critics tried their best. It might not be Shakespeare, but it is fun, and if there’s one thing there’ll always be a place for in the charts, it’s some straight-up, honest-to-goodness fun. The boring old farts in the music press might have called it a travesty, but the spandex attired, platform heeled youth had the last word – “Da Ya Think I’m Sexy?” hit #1 on the singles chart and Blondes Have More Fun hit #1 on the albums chart. Stewart may have been pushing 40, but he still had it.

The critics hated Foot Loose & Fancy Free. They called it limp, complacent, gauche, out of touch…. and that was when they were being kind. Rod Stewart had lost touch with the kids, they said, not only musically but culturally. Maybe they were right. It didn’t really matter, though. Critics review albums, they don’t buy them. That’s left to the fans, who saw enough merit in the super sleazy “Hot Legs” and the affectionate “You’re in My Heart” to send the album to Number 2 on the Billboard LP Top 50. It’s not a faultless album, and the absence of any strong ballads is palpable. Still, it’s fun, and sometimes, that’s enough.

Released in 1981, Tonight I’m Yours finds Rod Stewart trying very hard to keep up with the times. You can’t blame him. The world had come a long way since his early ’70s heyday; no matter how sensational the voice or how fetching the hairstyle, a rasp and a mullet could only take him so far in a music scene dominated by synth-pop and new wave. He didn’t ditch the rock completely, but songs like “Young Turks” and the title track have enough computer wizardry and studio fakery to keep things modern. The fact that what sounded modern in 1981 sounds archaic now is a problem, but not a big enough one to undermine what’s essentially a very solid album.

A Night on the Town finds Rod Stewart back on familiar territory. There are elements of soul and even a light peppering of disco, but ultimately, it’s Rod Stewart’s warm, conversational folk that’s the star of the show. The standout title is “The Killing of Georgie (Pts. 1 & 2),” a sensitively written, perfectly executed narrative about the murder of a gay friend. That Rod Stewart had the nerve to sing about hate crimes decades before the term had even been coined speaks volumes about his courage as an artist. Other highlights include the seductive “Tonight’s the Night (Gonna Be Alright),” the lewdly brilliant “The Balltrap,” and the heartbreaking “The First Cut is the Deepest.”

#5 – An Old Raincoat Won’t Ever Let You Down

Critically, An Old Raincoat Won’t Ever Let You Down was a roaring success. Rod Stewart was almost unanimously praised for his nuanced interpretations of other people’s songs and his own compassionate, rawly emotional compositions. But critical success doesn’t always translate to album sales. Released in February 1970, the album peaked and stalled at a disappointing No. 139 on the US Billboard 200 album chart. It’s still a brilliant album though, with some incredible support from Rod Stewart’s band (which includes several members of the Faces) and a frankly dazzling vocal performance from Rod Stewart himself. His redefinition of Mike d’Abo’s “Handbags and Gladrags” is particularly spine-tingling.

The title for Atlantic Crossing wasn’t chosen at random. Rod Stewart was, quite literally, crossing the Atlantic, exchanging Blighty for a new life in America. After deciding that a new country was as good a reason as any for some changes, Rod Stewart hired legendary producer Tom Dowd to smarten up his sound. Dowd scrapped any remaining trace of folk, ditched the acoustic guitars, and ramped up the rock and roll. The result was Stewart’s slickest, most sophisticated offering to date. You can’t help but miss the ragged energy of his earlier albums, but the smooth groove of “Sailing” and blistering rock of “Three Time Loser” are fair compensation. Crossing the Atlantic may have smoothed off his edges, but there was still enough of the old Rod to keep us happy.. for now, at least.

Released in 1970, Gasoline Alley was ignored by the critics and overlooked by the public. Shame on them both. It may have lacked hits, but it’s resplendent in every other way. Like his debut album, it blends contemporary covers of hits by the likes of Bob Dylan and Elton John with old-school rock and roll classics and originals. But whereas its predecessor lacked confidence, Gasoline Alley drips in it. Rod Stewart always had the voice; here, he finds his swagger. Despite the reliance on acoustic instruments, his rasping delivery and rocker sensibilities keep things swinging. He knows when to dial things back (check out his nuanced performance of Bob Dylan’s “Only a Hobo”, when to turn up the tempo, and when to cut loose and go wild. The whole thing is a joy – if you missed it the first time, now’s the time to put things right.

Following hot on the heels of 1971’s Every Picture Tells a Story came Never a Dull Moment, an album every bit as interesting as its title implies. Stewart demonstrates his gift for interpretation with some fine covers of Bob Dylan’s “Mama You Been On My Mind,” Jimi Hendrix’s “Angel,” and Sam Cooke’s “Twisting the Night Away.” The originals aren’t exactly doozies either, even if “You Wear It Well” does sound more like Maggie May Part Two than a brand new composition. In fact, the entire album bears more than just a passing resemblance to Every Picture Tells a Story – but, hey, there are worse albums to copy, and Stewart and his band have rarely sounded in better form than they do here.

#1 – Every Picture Tells a Story

Some people call Every Picture Tells A Story overrated. Those people should stop talking about it and start listening to it. Ultimately, the only problem with Every Picture Tells a Story is that it’s proved impossible to live up to. No matter how great some of Stewart’s other albums are, none can quite match its greatness. Then again, what could? This, after all, is the album that gave a home to “Maggie May,” one of the greatest performances ever. Before Every Picture Tells a Story, Stewart was best known as a journeyman singer who’d done great things with the Faces and Jeff Beck but whose solo output had been at best underwhelming and at worst completely ignored. After it, he was one of the biggest rock stars in the world. 50 years later, he still is.