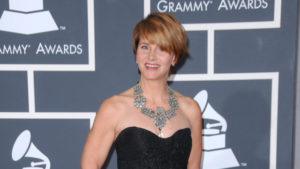 Our top 10 Shawn Colvin songs list looks at the catalog of an American singer-songwriter famed for her contemporary-folk sound. Born in 1956, she exhibited her love for music at a tender age, learning to play the guitar when she was ten. Her inspiration for music was her father’s playlist, which consisted of songs by The Kingston Trio and Pete Seeger. Shawn Colvin started her music career by playing music at local bars. She did several gigs while still a college student.

Her sound became popular in Illinois, eventually leading her to form a band. Shawn Colvin convinced Jack O’Boyle, Brian Sandstrom, and Dennis Conroy, formerly of The Cryan’ Shames, to join her in forming a band. While the band’s fanbase grew in a few months, Shawn Colvin’s drug use and personal drama cut short its success. She would soon join the country band Dixie Diesels. While Carbondale was the band’s inception place, the members felt that success lied beyond the town’s horizons. With the band members, Shawn Colvin relocated to Austin. Sadly, she would take a break from music at twenty-four after straining her vocal cords.

Shawn Colvin bounced back to the music scene and joined The Buddy Miller Band. Here, she played the guitar and featured on the vocals. Shawn Colvin impressed producer Steve Addabbo with her vocals. This resulted in having her hired to provide backing vocals to Suzanne Vega’s “Luka.” Shawn Colvin went on tour with Suzanne Vega to promote the song.

By this time, Shawn Colvin was ready to start her solo career. It all commenced with signing with Columbia Records, where she released her debut album Steady On (1989). Record producer Steve Addabbo played a significant role in helping her album succeed. Talking of success for the debut album, Steady On (1989) went on to win the Grammy Award in the Best Contemporary Folk Album category. Soon, her name would become quite popular in the Grammy Award nominations.

Her sophomore album Fat City (1992) was nominated for a Grammy Award for Best Contemporary Folk Recording. The album featured the hit “I Don’t Know Why,” one of the best Shawn Colvin songs. “I Don’t Know Why” also saw Shawn Colvin’s name listed among the Grammy Award nominees for the Best Female Pop Vocal Performance category. Shawn Colvin continued to release albums in the 1990s, marking the busiest period of her solo career.

The release of the single “Sunny Came Home” saw her receive international fame. “Sunny Came Home” won her two Grammy Awards for the Record of the Year and Song of the Year. Shawn Colvin has continually released music, though on a lower frequency compared to the 1990s, which we can consider to be her primes. Her recent albums have featured guest artists such as Jakob Dylan, Emmylou Harris, and Alison Krauss. Additionally, Shawn Colvin has offered her vocals to songs by many artists, including Elliot Murphy, Edwin McCain, James Taylor, Bruce Hornsby, and Béla Fleck. Here are the top 10 Shawn Colvin songs that bring her blend of country-folk, contemporary folk, Americana, and pop elements.

Opening our top 10 Shawn Colvin songs is the duet “One Cool Remove.” The song is featured on Shawn Colvin’s album Cover Girl (1994). Initially, the song was released by Greg Brown in his album One Big Town (1989). While Greg Brown’s original version might have been great, the harmonized singing by Shawn Colvin and Mary Chapin Carpenter make the song unique and haunting.

“Diamond in The Rough” takes us back to Shawn Colvin’s debut album Steady On (1989). The song was her first true composition, starting a solo career after a tough musical path earlier. Shawn Colvin released her memoir named after this song almost a decade ago. In the memoir, she talks about her fairly successful musical career and battle with depression. Singer Arik Ancelin released his breakthrough single under the same title (but with different lyrics).

More than thirty years ago, Shawn Colvin released her debut album Steady On (1989). Among songs that added glamour to her debut album include the album-titled song “Steady On.” You ought to love the vocal quality she exhibits in this song, especially in the chorus. Without a doubt, the lead single “Steady On” was instrumental to Shawn Colvin’s winning her first Grammy Award for the Best Contemporary Folk Album in 1991.

“Round of Blues” is one of the best Shawn Colvin songs from her sophomore album Fat City (1992). Initially, Shawn Colvin had written the whole song alone. However, Larry Klein suggested that it needed a bridge that he contributed. The four-minute song features an awe-inspiring tune that complements her vocals. “Round of Blues” went on to chart on the Billboard Modern Rock Tracks and Billboard Adult Contemporary Charts.

This led the song to Shawn Colvin’s nomination for a Grammy Award for the Best Female Pop Vocal Performance in 1994. However, she lost to the popular song “I Will Always Love You” by Whitney Houston. Other songs that competed for the award that year include “Dreamlover” by Mariah Carey, “Miss Chatelaine” by K.D. Lang, and “I Don’t Wanna Fight” by Tina Turner.

“Tougher Than the Rest” was originally composed and released by Bruce Springsteen on his album Tunnel of Love (1987). Shawn Colvin took on the song releasing her cover version on her album Uncovered (2015). The song’s lyrics allude to falling in love after the heart has gone through much in previous relationships. Shawn Colvin is among many artists to have made this cover which emphasizes vulnerability. Other artists to have covered the song include Chris LeDoux, Emmylou Harris, Cher, Travis Tritt, Midland, Darren Hayes, Jimmy Barnes, and Everything But The Girl.

“Get Out of This House” is one of the gems from her album A Few Small Repairs (1996). The song finds Shawn Colvin demanding that her lover walks away. Despite the song oozing anger, its poetic vibe spices up its feel. The song led to Shawn Colvin’s nomination for a Grammy Award for the Best Female Pop Vocal Performance in 1997. However, “Un-Break My Heart” by Toni Braxton proved to be too good, having the artist walk away with the award. Other songs that competed for the award that year include “Who Will Save Your Soul” by Jewel, “Reach” by Gloria Estefan, and “Because You Loved Me” by Celine Dion.

#3 – Shotgun Down the Avalanche

Multiple Grammy Award-winning artist Shawn Colvin made her mark with her debut album Steady On (1989). One song that has proven too good to be forgotten from the album is “Shotgun Down the Avalanche.” The song alludes to a bad relationship and preparedness to move on from it. You can almost feel the sorrow in her vocals when she channels out much about the broken relationship. Despite having a melancholic vibe, the song towers over most of the songs in the album asserting its position on the top 10 Shawn Colvin songs.

“Whole New You” is the album-titled song from her sixth studio album. The song brings out Shawn Colvin’s best folk-pop vibe while displaying a more contemplative side of this artist. “Whole New You” comes almost four years after her last releases in A Few Small Repairs (1996). While it was hard to come up with the album, as revealed in an interview, the song “Whole New You” reminded many of Shawn Colvin’s true potential.

Number one on our top 10 Shawn Colvin songs list is the Grammy Award-winning song “Sunny Came Home.” The song is featured on the album A Few Small Repairs (1996). “Sunny Came Home,” tells of a woman who fixes her oven, then blazes her house. All this was motivated by her desire to escape her past. The song is inspired by a painting by her friend.