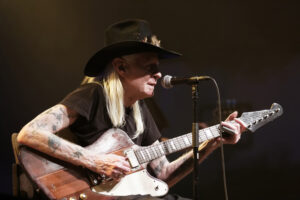 It was just announced that a new album in tribute to the late Johnny WInter entitled Brother Johnny will be released on  Quarto Valley Records on April 15 2022. The album is being produced by Johnny WInter’s younger brother Edgar Winter. The new album will feature and all star cast of musicians including and ex-Beatle. The album pays homage to Johnny Winter’s contributions to rock and roll music and of course the blues in which he was such a formabible star and talent. Rock and roll music owes everything to the blues and in the music of Johnny Winter one could hear how inspired the man was from the great blues artists like Muddy Waters to the pioneers of rock and roll going back to Chuck Berry whose music was very influential in Johnny Winter’s work.

On the new album, Edgar Winter recorded a version of Chuck Berry’s classic signature song “Johnny B. Goode,” with the brilliant guitarist Joe Walsh. The song has special meaning to Edgar Winter as he tells it on the album’s liner notes. It seems that when Edgar and Johnny Winter were young teenagers they entered a music contest with their band they called Johnny and the Jammers. The contest that was called the Johnny Melody Contest offered  an oeeuryunty to record in a studio for the first prize winner.  Edgar and Johnny Winter’s band knew how to play the song “Johnny B Goode,” so they entered the song in the contest and wound up winning first prize and then went into the studio to record. As Edgar Winter says in the liner notes…”the rest is history.”

Other rock and rollers contributing tracks and performances to the Johnny Winter tribute album includes a man that is continuing to carry on the blues rock and roll guitar tradition in the name of the mighty Joe Bonamassa. However the album also includes many other guitar greats such as ZZ Top’s Billy Gibbons, legendary Toto guitarist and A list studio sessions player Steve Lukather, The Allman Brothers Band’s brilliant guitar players and solo artists in their own right Derek Trucks and Warren Haynes, as well as other guitar greats such as Waddy Wachtel, Robben Ford, Kenny Wayne Shepherd, Doyle Bramhall II, John McFee, Robben Ford,  David Grissom,  Keb Mo, Doug Rappoport, Bobby Rush, and Phil X.

Other noted musicians playing on the album include The Doobie Brothers Michael McDonald, and drummers Gregg Bissonette and Taylor Hawkins of the Foo Fighters.